Deprecated: Methods with the same name as their class will not be constructors in a future version of PHP; wp_invictus_recent_posts has a deprecated constructor in /var/www/volumes/xvdh/vhosts/woodworkjunkie.com/httpdocs/wp-content/themes/wp-invictus/inc/widget.php on line 9 Deprecated: The called constructor method for WP_Widget class in wp_invictus_recent_posts is deprecated since version 4.3.0! Use __construct() instead. in /var/cache/wordpress-sources/6.0.1/wp-includes/functions.php on line 5472 Soundproof Compressor Enclosure | ALL-IN-ONE Woodworking Workstation – PART 5 | Woodwork Junkie
Skip to content 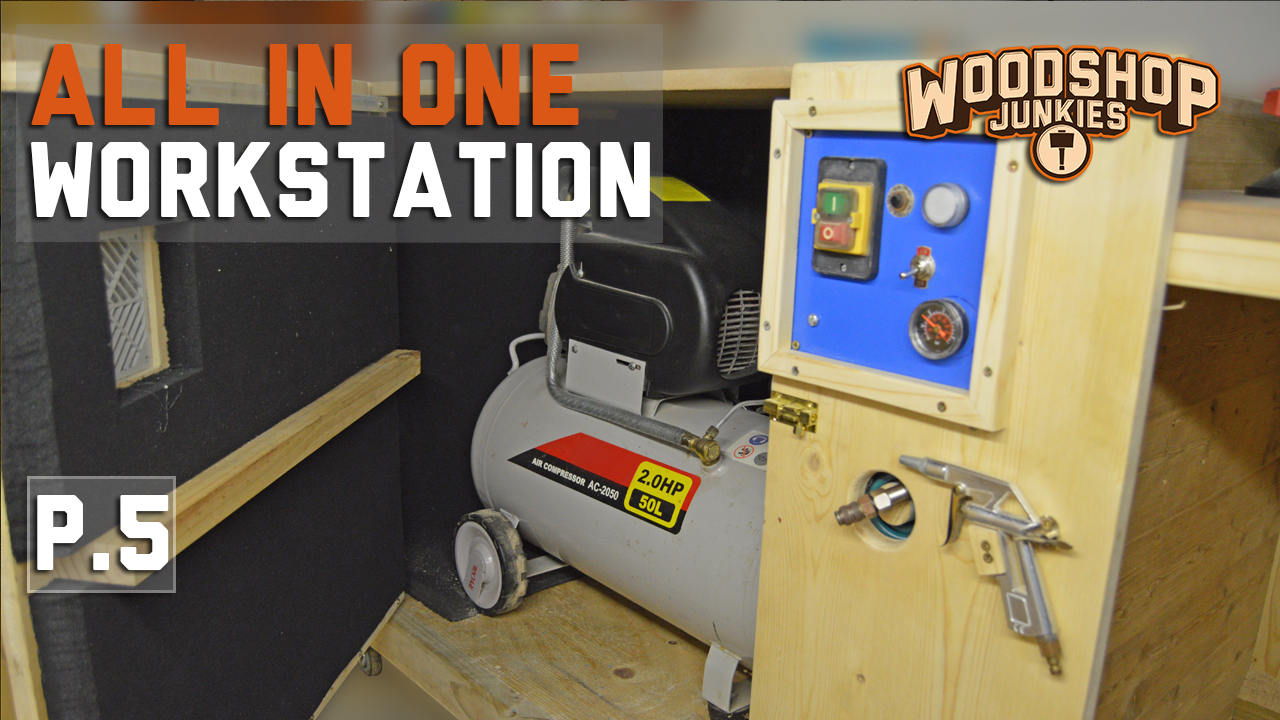 Making the most of a small shop – PART 5

My All-In-One Woodworking Workstation has come a long way from being just an idea and has already made life in my small shop more pleasant and functional.
Unfortunately, I still needed to deal with some bulkier items cluttering up the floor space.
One of these items was my small 50L compressor.

A compressor might not be an “essential” tool for woodworking but having a compressor at your immediate disposal does have a number of advantages.
Above and beyond these advantages, I just really wanted to get the thing out of my way. This is why I decided to build it into its own cabinet as an addition to my All-In-One Workstation.

Enclosing the compressor into its own cabinet meant I would be able to add soundproofing. Something I’m sure my neighbors would eventually thank me for.

The enclosure did, however, pose a potential nuisance. I wasn’t looking forward to having to open and close the box everytime I wanted to use the compressor. That’s why I decided I would build an external control panel that would allow me to start and use the compressor from outside the enclosure. 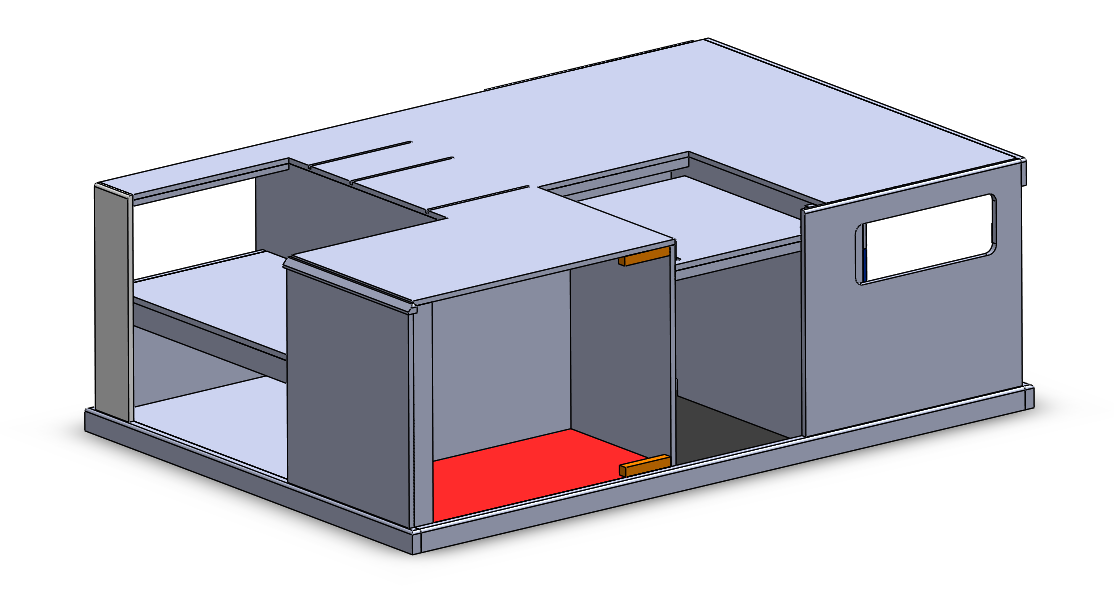 My first step was to add a base to the area I allowed for the compressor. This was done in the same way as the bases in the previous steps. By installing the base on top of planks fixed to the inside of the enclosure panels.

Because the gap was too large to fit one solid door, two small planks were installed to the right of the cavity that would allow me to install a panel to enclose that segment of the box.

The remaining area will be big enough to allow the compressor to be removed from the enclosure if the necessity arises. 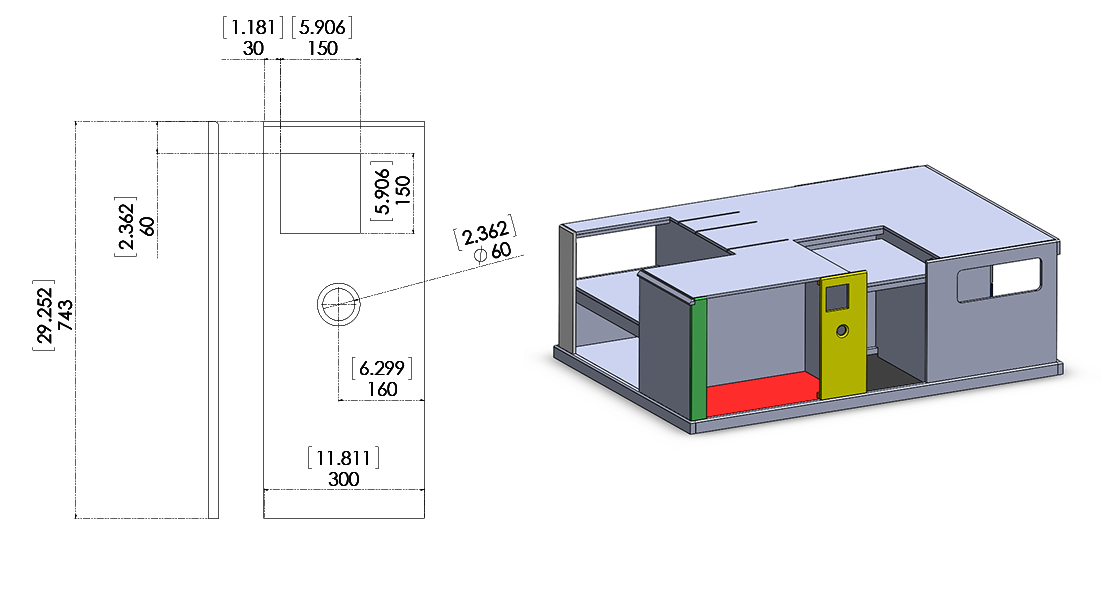 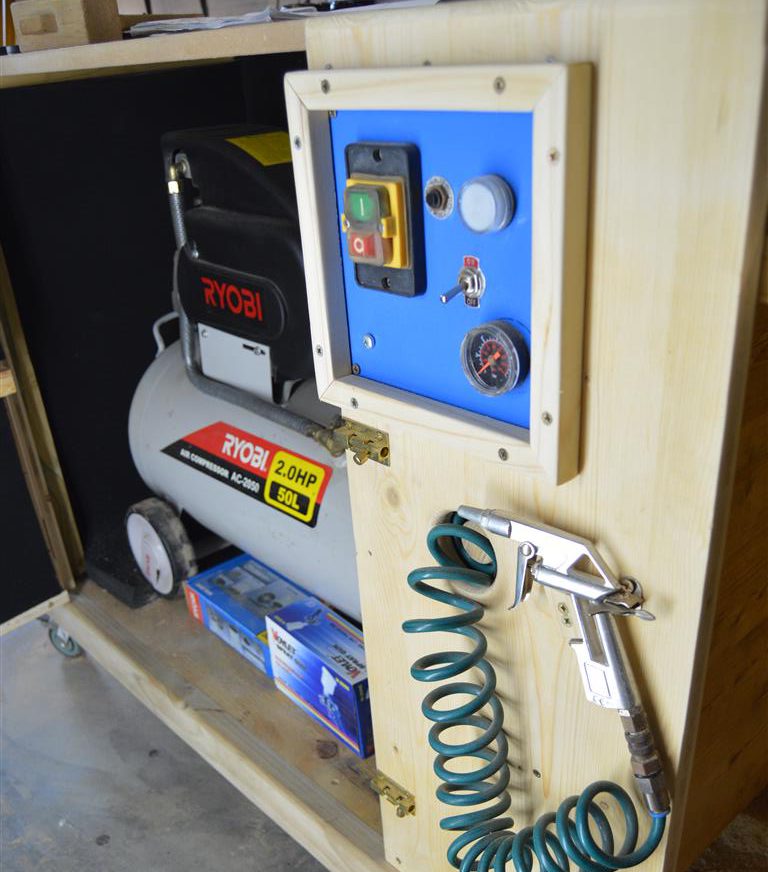 With the base installed the side panels were fitted.

The small panel to the left was just large enough to close the bench corner post. Onto this panel, I would later fix the hinges for the door.

On the panel to the right two cutouts were made. One was to install the external compressor controller interface while the other would be used to feed the air hose from.
The hole for the hose was cut only slightly larger than the coiled hose I was using.

A switch was installed to the interface cutout that was wired to a female power socket. The socket was installed on the inside of the enclosure.
The compressor would then be plugged into this socket and switched to its ON position.
This would allow me to start and stop the compressor by switching the external switch ON and OFF.

In addition to this, a pressure gauge and indicator light was also installed in the cutout. 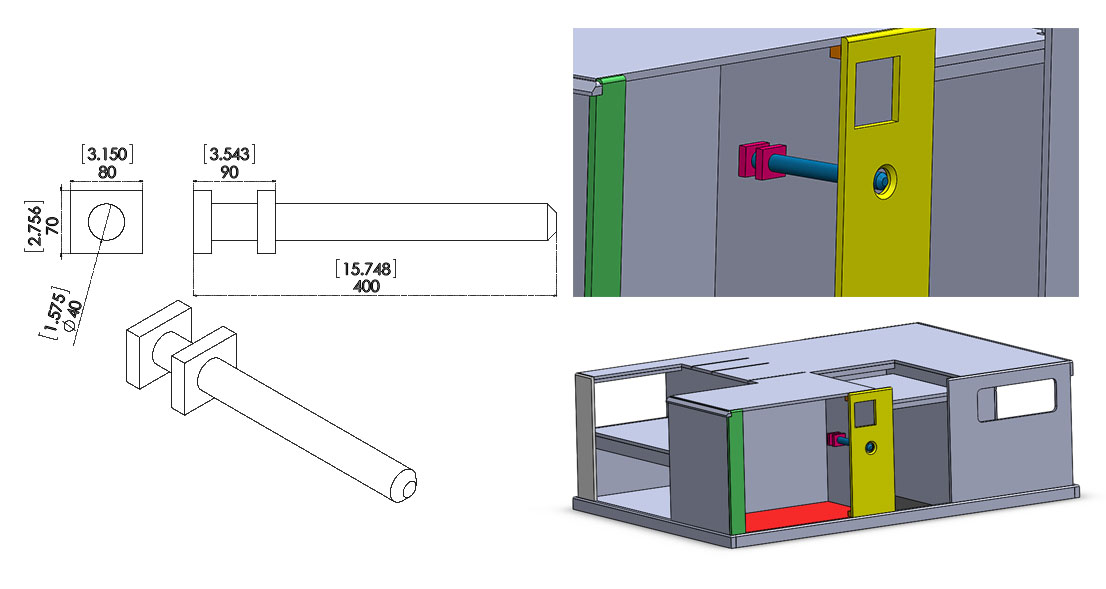 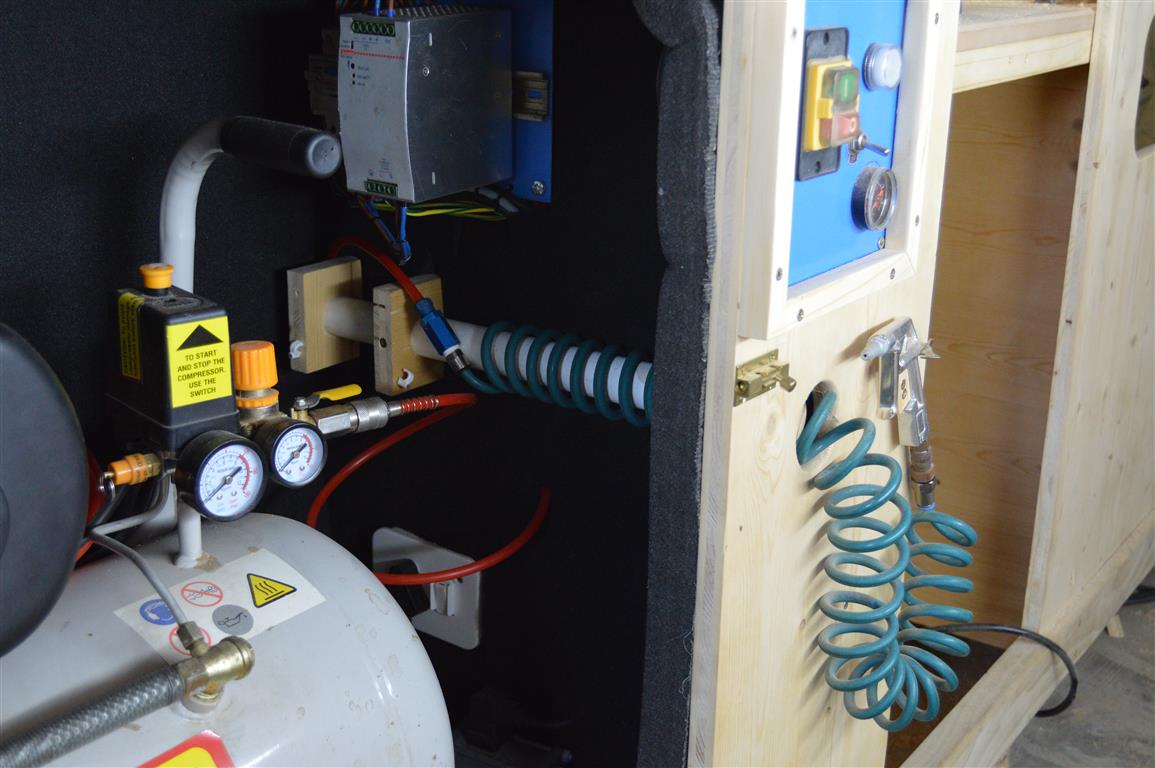 To keep the hose stored neatly inside the enclosure when it is not being used, a rod was installed over which the coiled hose could fit.

This meant that the opening between the rod and the face panel was just large enough to feed the coiled hose out.

The hose end was mounted on the outside of the box for easy access. 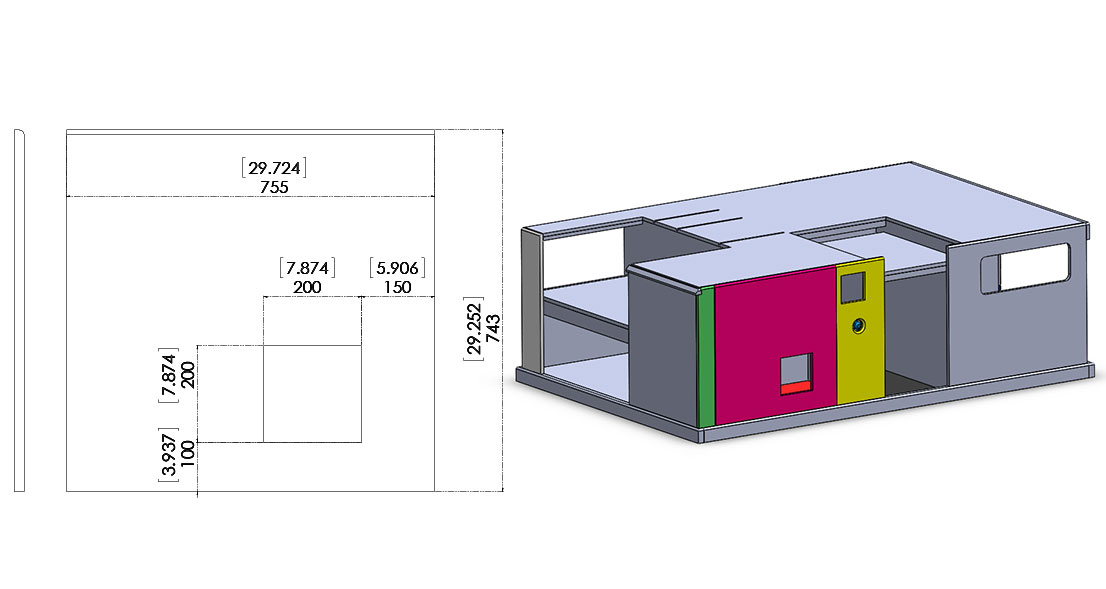 To complete the compressor enclosure a door was added.

To allow the compressor to suck the air it needs to fill its tank, a cutout was made in the door into which a louver was installed.

The final step was adding a layer of soundproofing foam to the inside of the enclosure.

At this stage, I only added the foam to the sides. I left the top clear as I am still planning on adding a router table extension to the bench top.

Other parts in this series: 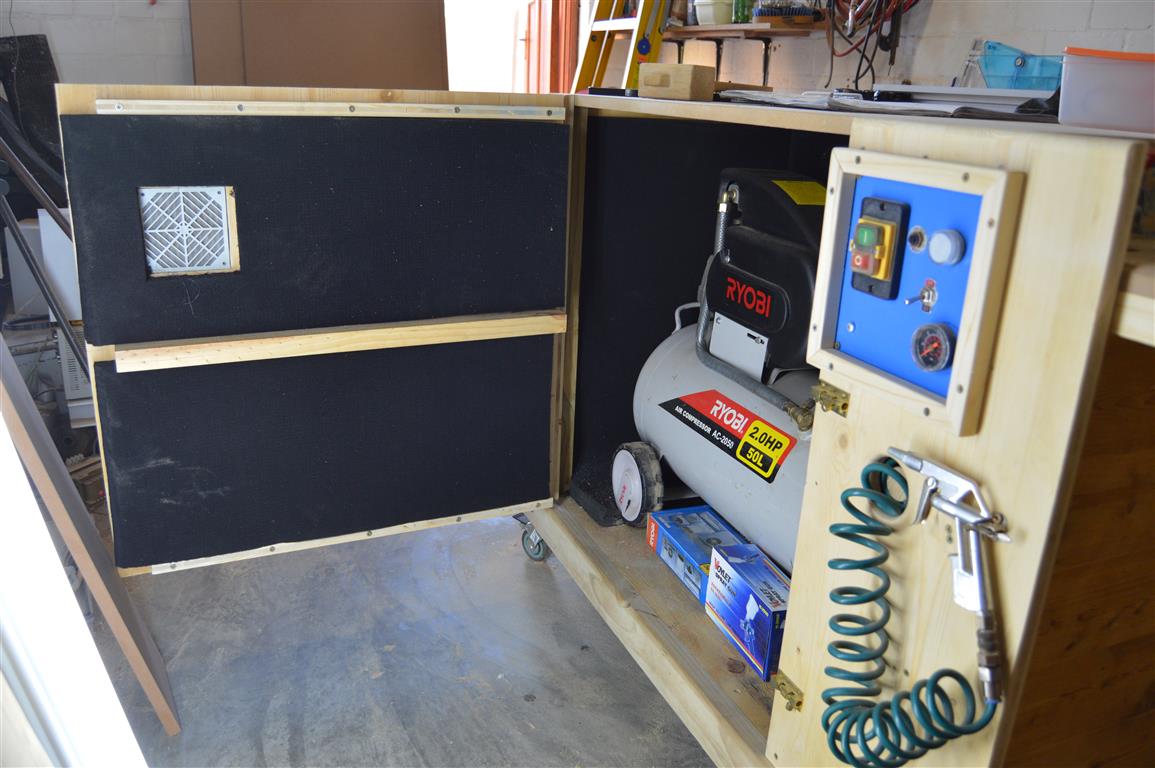 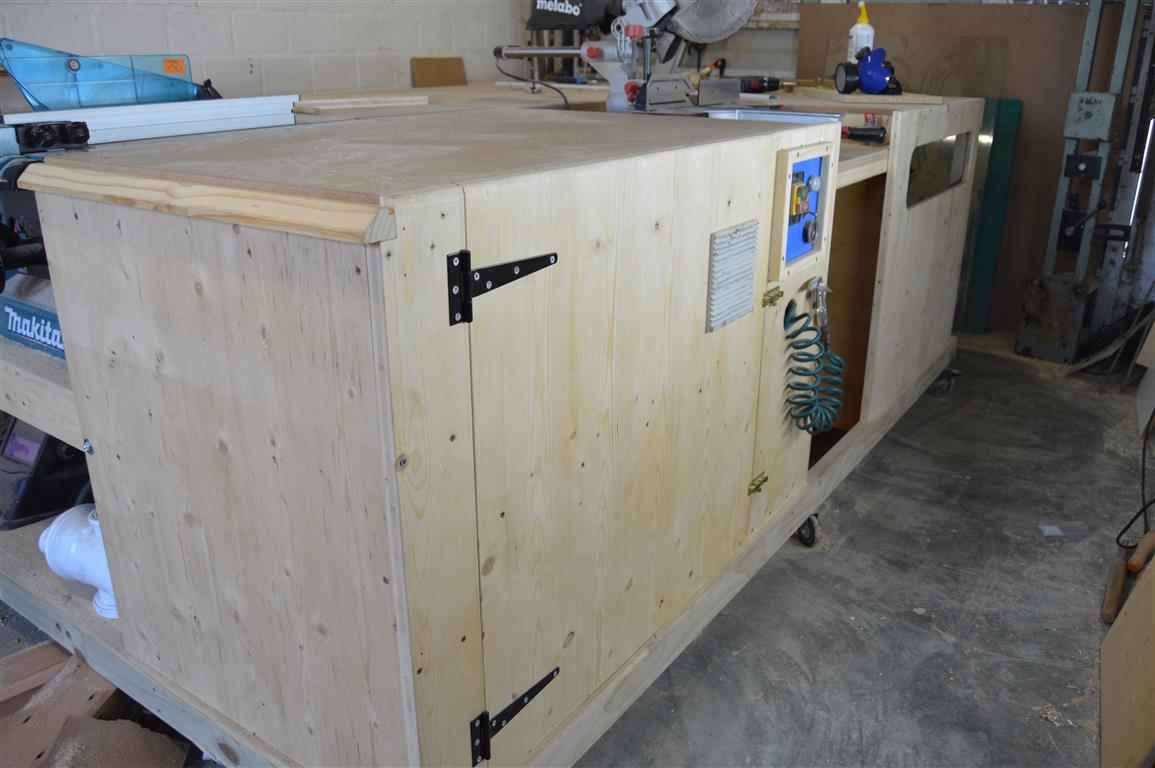 Note: My compressor is not a piece of equipment I use all that often. If it was a tool I used on a more regular basis I would not have installed it in such a small space out of fear of overheating.

This article has 17 Comments