Deprecated: Methods with the same name as their class will not be constructors in a future version of PHP; wp_invictus_recent_posts has a deprecated constructor in /var/www/volumes/xvdh/vhosts/woodworkjunkie.com/httpdocs/wp-content/themes/wp-invictus/inc/widget.php on line 9 Deprecated: The called constructor method for WP_Widget class in wp_invictus_recent_posts is deprecated since version 4.3.0! Use __construct() instead. in /var/cache/wordpress-sources/6.0.1/wp-includes/functions.php on line 5472 Rotate-To-Store Thickness Planer – ALL-IN-ONE Woodworking Workstation – PART 6 | Woodwork Junkie
Skip to content

Making the most of a small shop – PART 6

Up to this point (Part 1 – 5), I have managed to install the bulk of my larger tools into my All-In-One Woodworking Workstation with the exception of my thickness planer.

Installations to be added:

Adding my 318mm(13inch) thickness planer to the bench was the next logical step because it is a piece of equipment that I find myself using often. It is also a tool that performs better with extended infeed and outfeed tables to limit or even eliminate planer snipe.
It is, for this reason, I decided on placing it more toward the center of the bench and across from the already installed miter saw. This would place it right in the firing line of the table saw so it would need to be able to fold away to prevent the two tools from clashing.

In addition, to maximize the infeed and outfeed support capability of such a large bench the planer needed to be recessed to get the planer bed flush with the bench top. 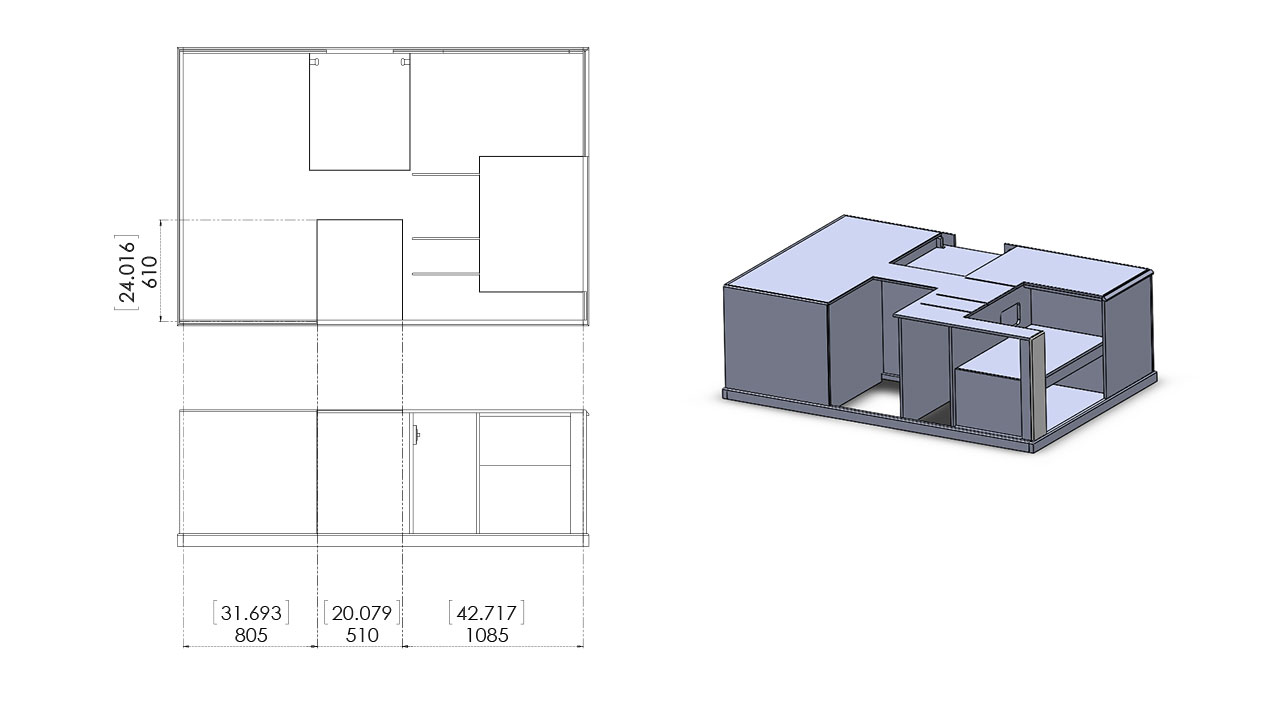 My first step in adding my thickness planer to my workstation was removing the segment of the top where the planer would be installed. 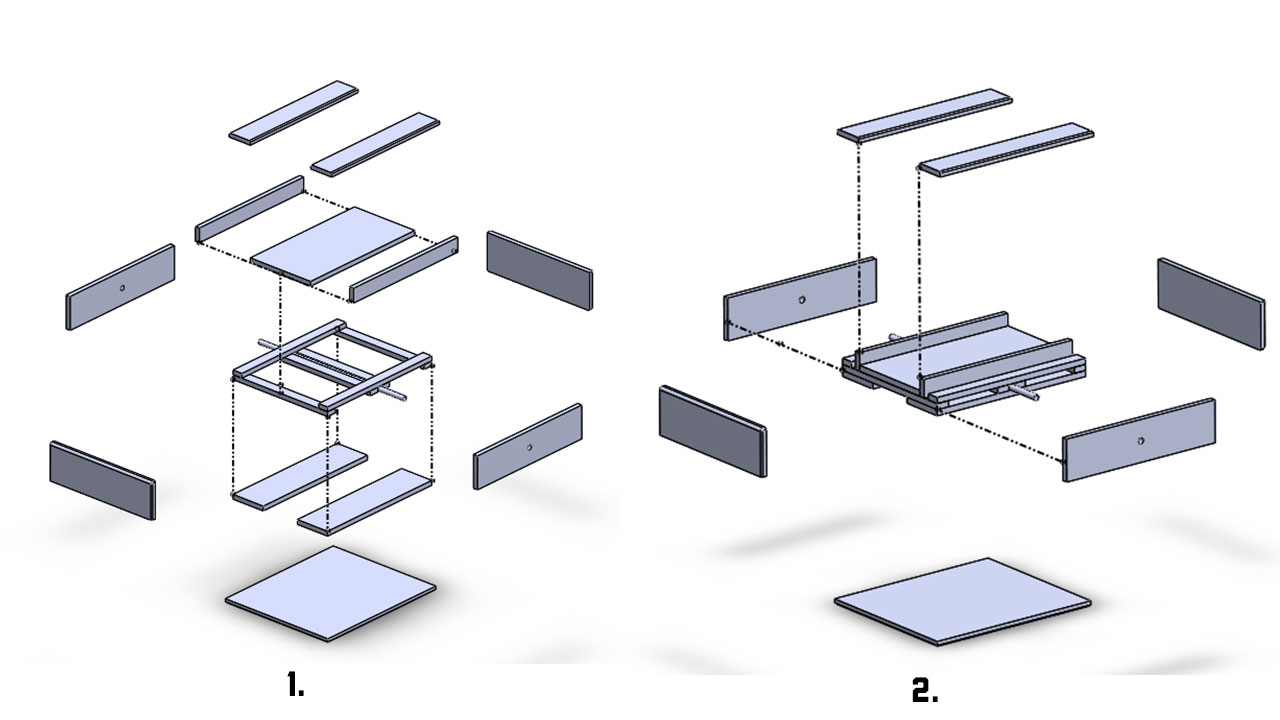 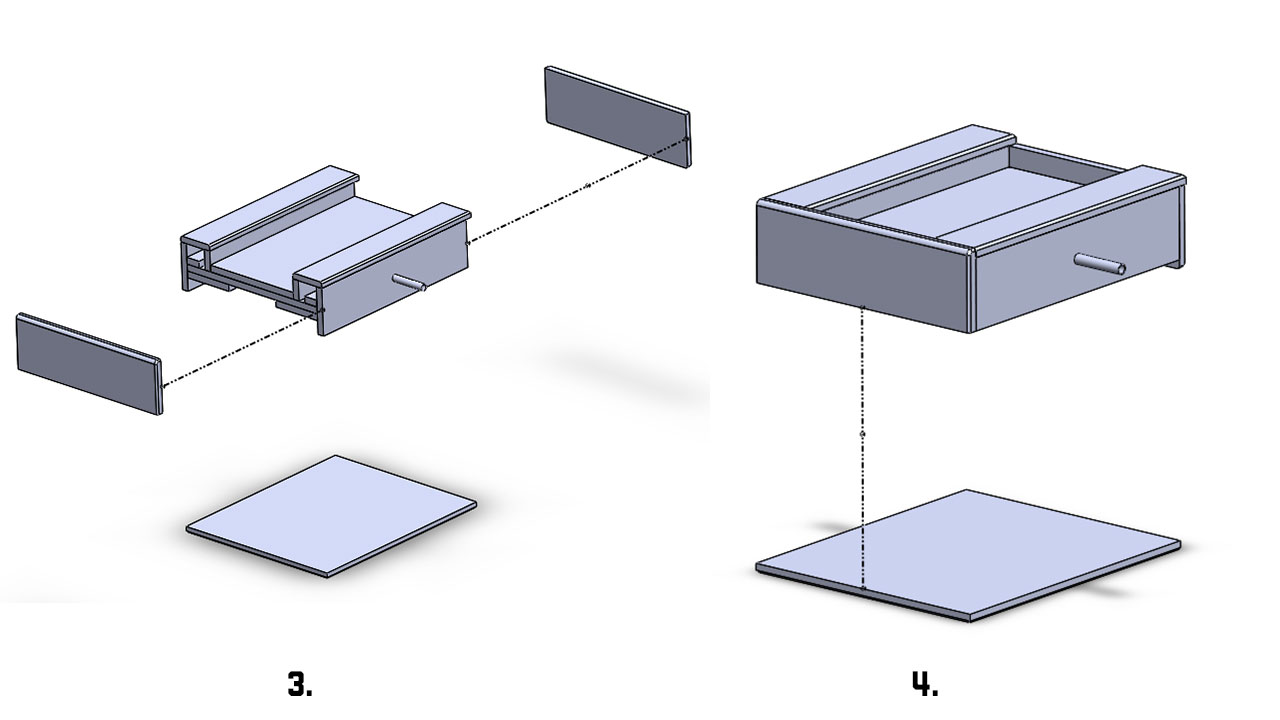 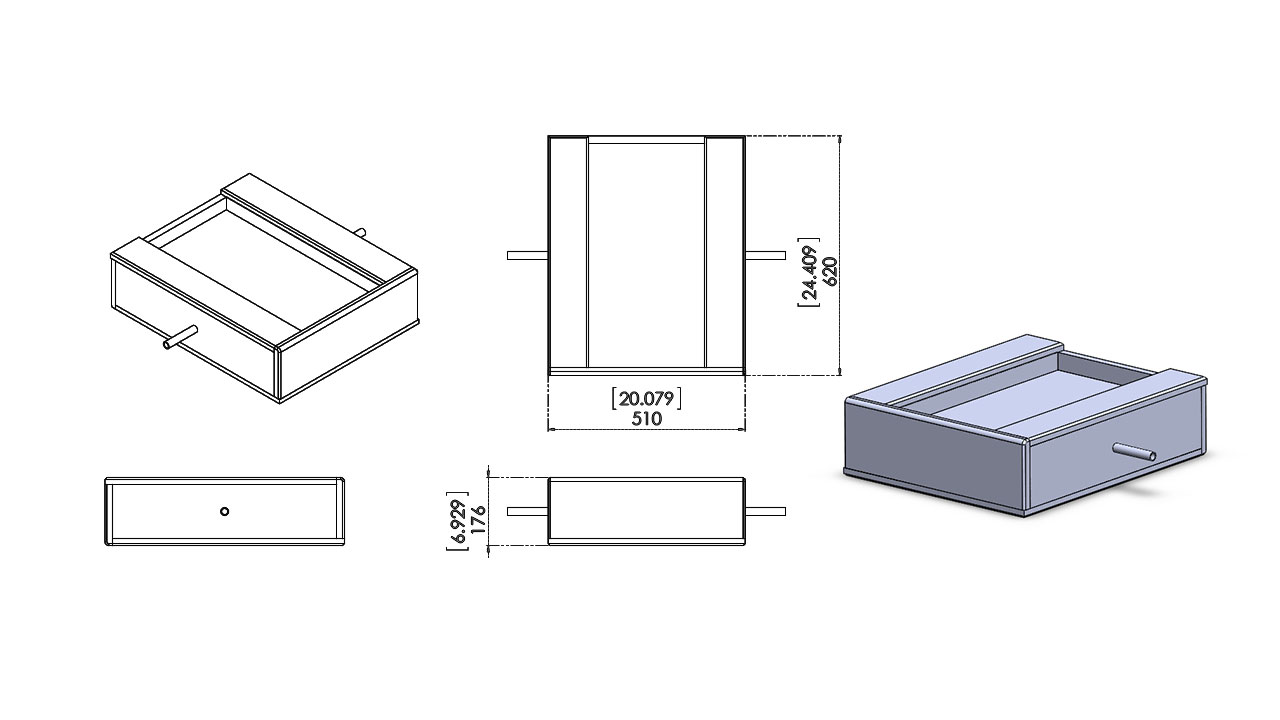 The rotating planer bed was assembled next.

The rotating bed was assembled with a 19mm(3/4″) thick wall stainless steel pipe in the center to act as a pivot point and allowing it to make a 180° rotation for packing away the planer.
The pipe was then sandwiched between an arrangement of planks (diagram 1 and 2) that was slightly thicker than the pipe diameter. This was done to minimize any deflection in the pipe while still allowing the pipe to move freely.

This arrangement of planks also formed the base on top of which the planer was going to be fixed (diagram 2). The rest of the bed was then assembled as a box around the base.

Step 3: Fitting base to the bench 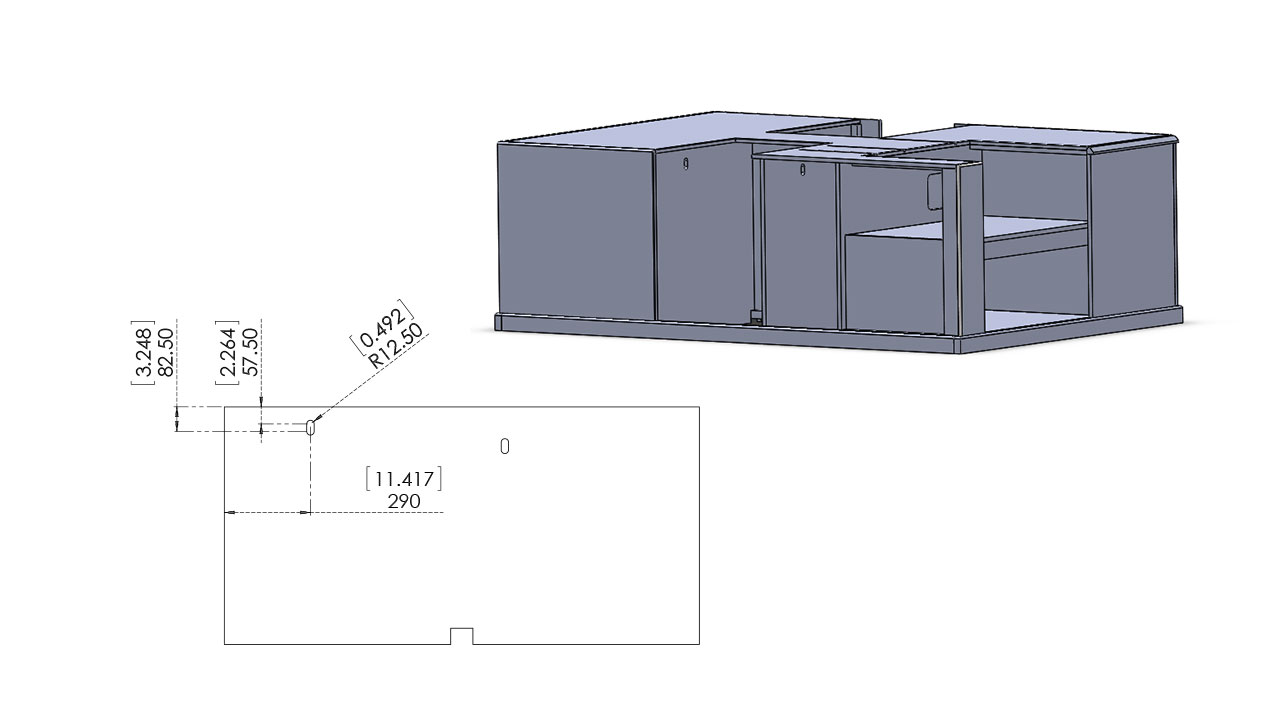 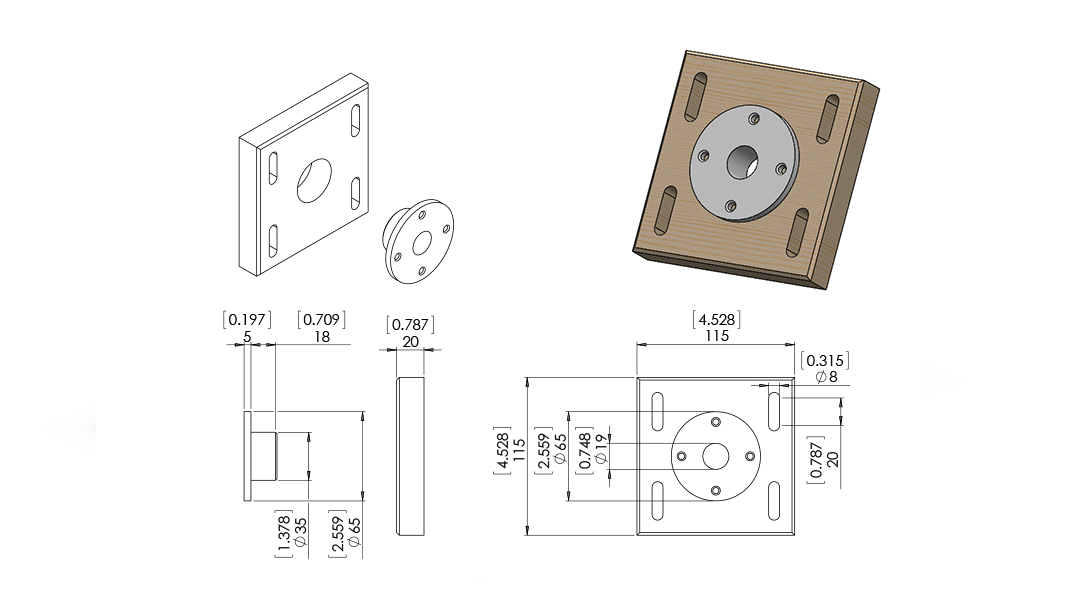 The rotating bed was installed to the All-In-One Workbench in the same way as the fold-down miter saw base in Part 3. By mounting height adjustable bushings on the two partitioning panels that form the sides of the cavity. Then running the pivot shaft of the rotating bed through these bushings.

However, instead of placing the bushings at the rear of the bed to allow it to fold down (such as in the case with the miter saw bed), the bushings were mounted in the center to allow the bed to make a 180° rotation.

The bushings were installed over slots that were cut into the partitioning panels to allow the shaft to move up and down when adjusting the height of the bush housing. This allowed for the rotating bed to be perfectly aligned with the bench top.

The bush housing was then secured by tightening the bolts and the planer was mounted to its base using bolts through the base panel.
After the planer was secured the final panel (as shown on step 2 diagram 4) was fixed in place.

The final step in this installation was adding toggle latches to secure the planer bed in either its working or stored position.

A door was also added to the opening under the rotating bed.

Because the shaft was in the center of the rotating bed the weight was well balanced and little force was required to keep the bed in a level position.

Installing my planer on a rotating bed was a great idea. When it is not being used it is stored upside down and out of the way while the box completed the bench top to provide a larger working surface.
To use the planer I would open the door, disengage the latches, and swing the planer over into its working position before re-engaging the latches to secure the bed.
Because the planer bed was installed flush with the bench top I saw a great reduction in planer snipe. 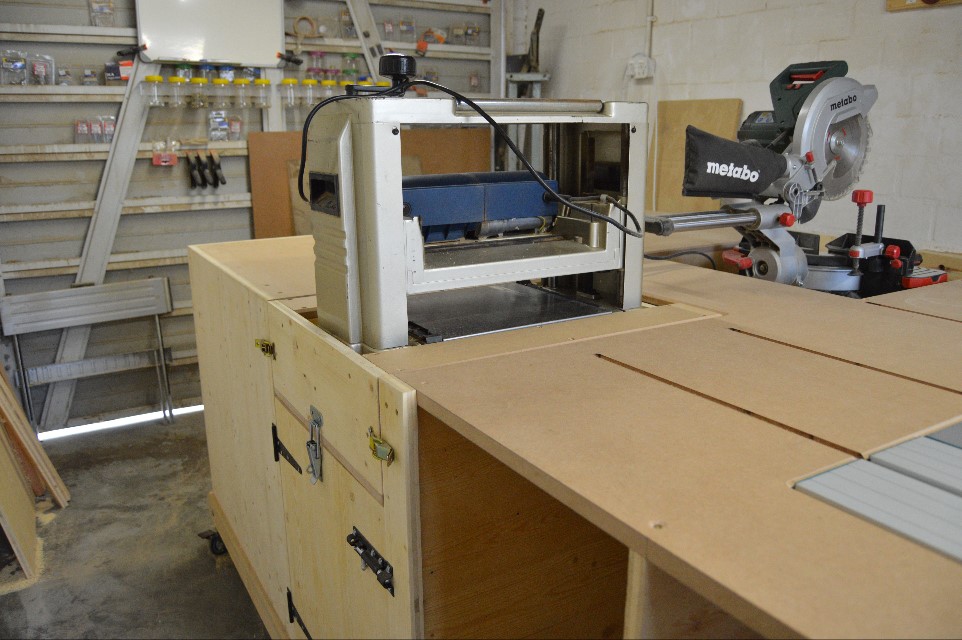 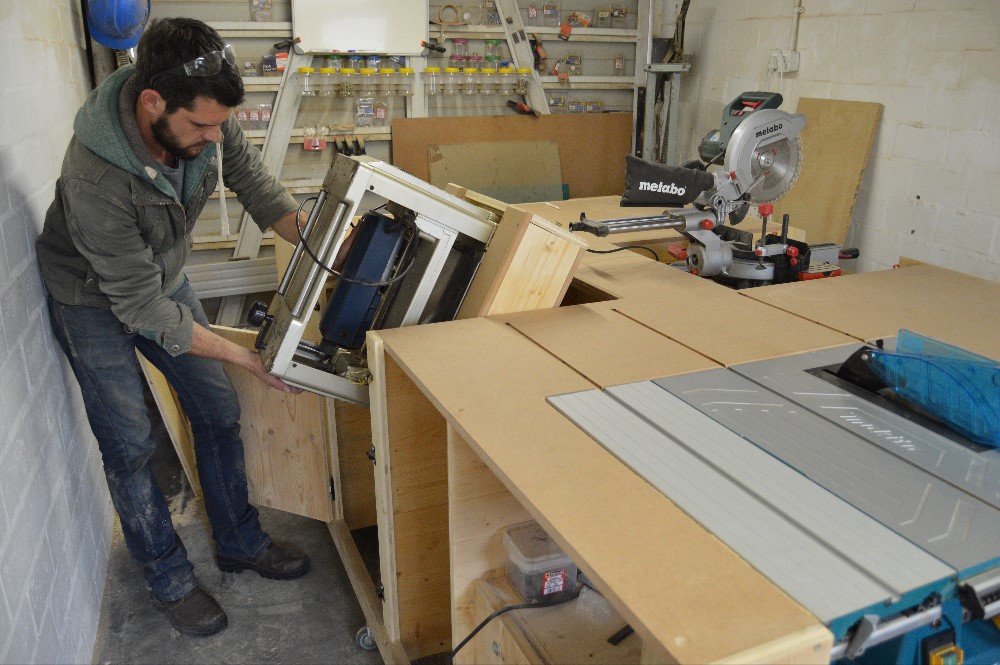 This article has 8 Comments