Making the most of a small woodworking workshop has to start somewhere.
Why not start by organizing and storing the range of bits laying around our shops in a convenient wall mount drill bit holder and save ourselves the frustration of trying to find the right drill bit in the cluttered space that is our workshops.

The beauty of this drill bit holder is the folding trays. The folding tray mechanism is achieved by fitting the trays on a pivot and adding a spring-loaded cam to change the angle of the tray when the door is opened. This is to allow storage of bits not just in columns but also in rows which allows for easy access to all bits and optimizes space.

(Watch above video for building procedure)

Lumber cutting list is based on standard PAR’ed pine and chipboard sizes.
In addition to the lumber for the project, you will also need a spring that can fit in a 10mm hole. The spring needs to be strong enough to push the cam up and tilt the trays. (Refer to video) 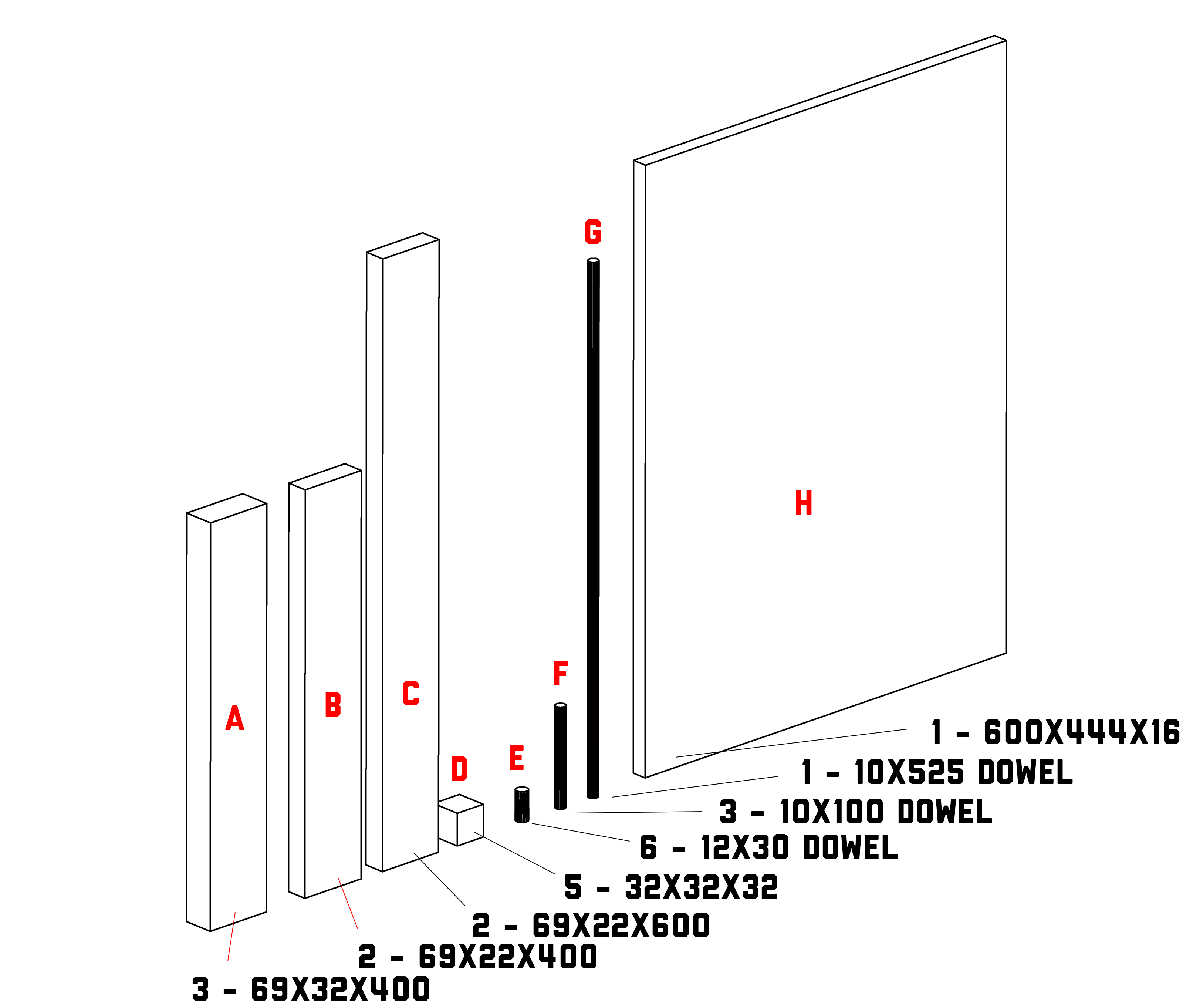 NOTE: Cutting list of cabinet doors are NOT included as the woodworker can opt for a different look and feel for the door.

Prepare the two cabinet box side uprights (C) by drilling the holes into which the six 12mm dowels (E) will be glued. This will be the pivot point for each one of the three trays.
The holes are drilled at a depth of 10mm.
Keep in mind that the orientation of the holes on the left upright and the right upright are different as shown in the diagram below.

The three trays are prepared using the “A” components on the cutting list.
Make the cut-outs as indicated by the diagram using a router with the appropriate bit.
Also, use a router to fillet the top front and lower back edge of the tray. This is done to prevent the tray from jamming against the backboard when the tray is being folded down.

Assembly – Step one – The box

Assemble the box as indicated in the diagram below.
Glue the six pivot dowels (E) into place on the already prepared “C” components.
The “C” components will then be assembled along with the “B” components using screws to make up the box frame.
Thereafter the backboard “H” can be attached from the rear using screws.

When installing the cam, fit the block that gets fixed to the bottom of the box first.
Place the cam spring inside the hole of the lower block, insert the cam on top of it, and then fix the top block also. (The cam spring should not be longer than 10mm when compressed and should have enough force to lift the trays even when they are loaded with bits)
Test if the cam is moving correctly by manually pushing it down and observing if the spring returns it to its top position.
After this, the push blocks need to be fixed to the camshaft in their correct positions.
This is done by pushing the camshaft down to its lower position and then fixing each of the push blocks so that the top of the push block lines up with the lower part of the corresponding pivot dowel. If the push block is lined up correctly, the tray will be leveled when installed as the tray will be supported by the pivot dowels and push blocks only. 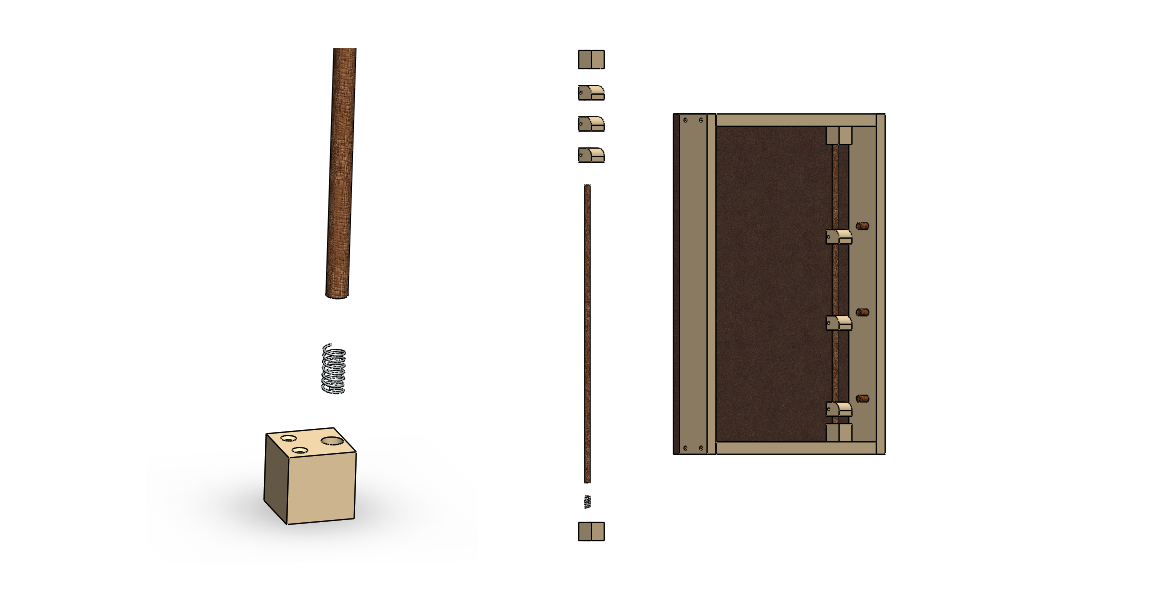 After the cam has been installed the trays can be fitted. It would be wise to drill the bit holder holes into the trays before installing them into the cabinet. 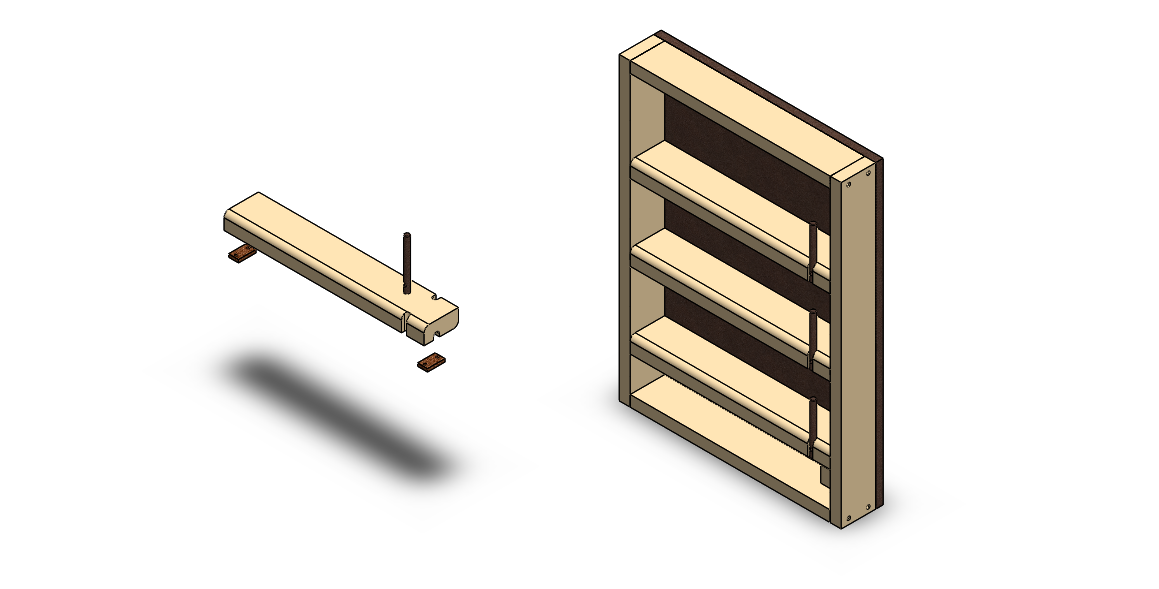 To secure the trays in place, use a piece of hardboard or steel plate as shown below. 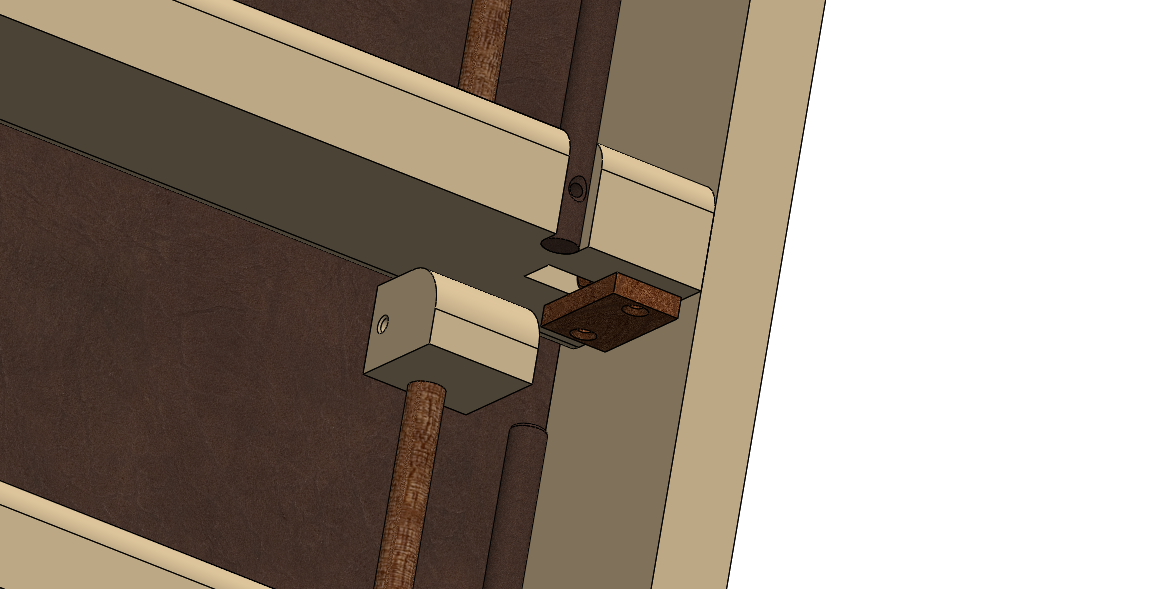 Attach stoppers in the form of galvanized profiles or even just wooden stopper blocks to prevent the trays from tilting too far forward. 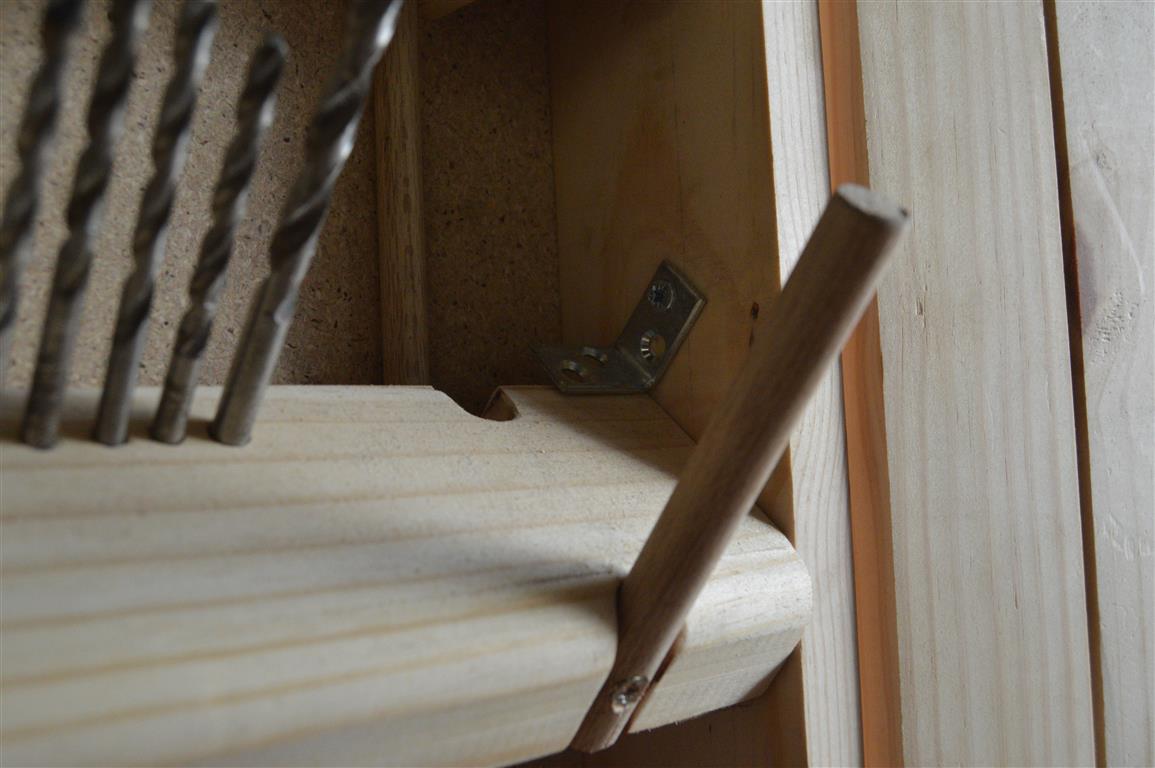 In the final step, the door or doors can be fitted to the box.
In the case of a single door, it is important to fit the door hinge on the same side of the box as the tray lever dowel. This is done so that the door will push against the lever dowels before touching any of the bits.

The cabinet can then be fixed to the wall and the drill bits added.

This article has 15 Comments