Deprecated: Methods with the same name as their class will not be constructors in a future version of PHP; wp_invictus_recent_posts has a deprecated constructor in /var/www/volumes/xvdv/vhosts/woodworkjunkie.com/httpdocs/wp-content/themes/wp-invictus/inc/widget.php on line 9 Deprecated: The called constructor method for WP_Widget class in wp_invictus_recent_posts is deprecated since version 4.3.0! Use __construct() instead. in /var/cache/wordpress-sources/6.0.3/wp-includes/functions.php on line 5474 Best Value Miter Saw For DIY | 1 Year User Review – METABO KGS 254 M | Woodwork Junkie
Skip to content 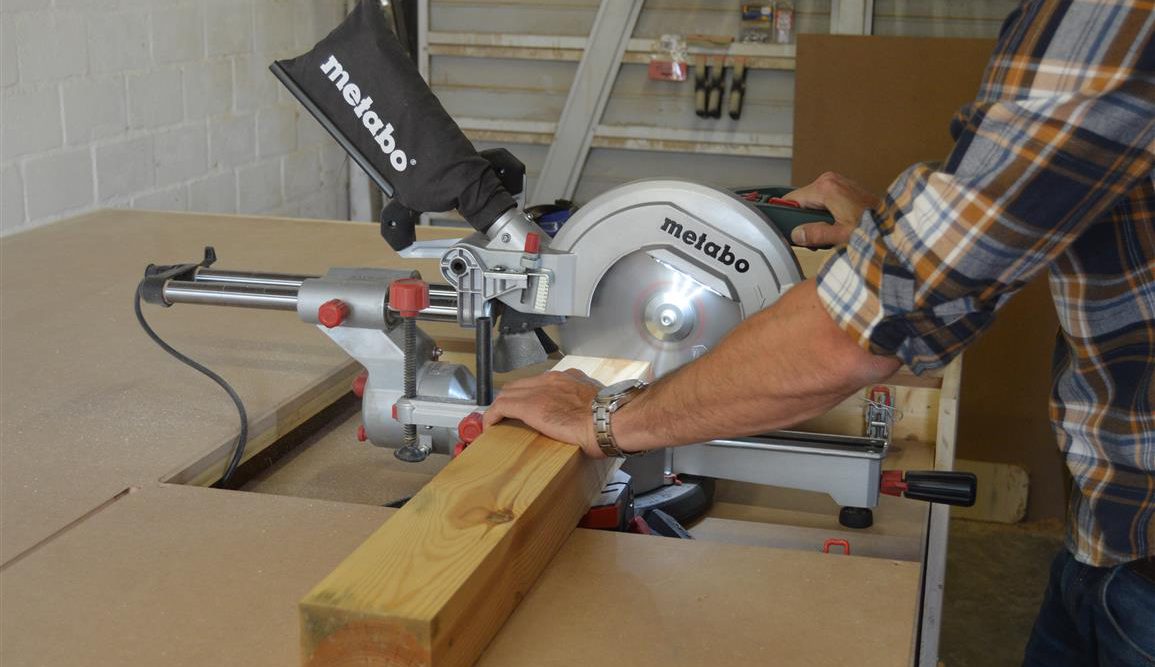 After being away on a short hiatus I figured I’d jump right back in by telling you about a sense of admiration I have discovered for a seemingly lesser known brand of power tool. An admiration that is largely owed to my decision to purchase the Metabo KGS 254 M Sliding Compound Miter Saw.

I bought my Metabo Miter Saw little under a year ago after being very disappointed in the saw I had at that stage. The Bosch PCM 1800 SD managed to fail on me not once but twice leaving me saw-less while waiting for warranty claims to be settled. With Bosch employees adamantly trying to convince me that I was working the tool too hard as it is only intended for “DIY”. DIY? I’m a woodworking hobbyist who is lucky to squeeze off a couple of hours to mess around in my shop over weekends. What could I possibly be doing that is not considered DIY?
But I digress, this is post is not about the disappointment I experienced at the hands of one of my favorite power tool manufacturer but rather the fondness I’ve found in a brand that might not be as well known or more specifically, their miter saws. 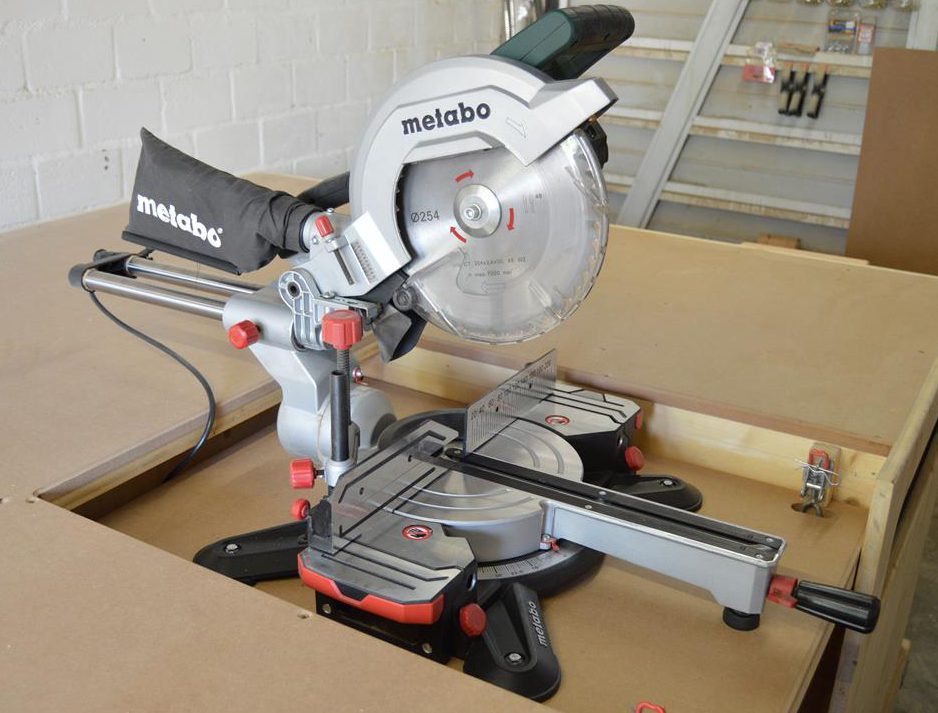 Besides Metabo’s simplistic color scheme of green and black with hints of red (that won’t be winning this saw any awards for best-looking), you will notice a well-built machine despite the fact that it is on the lower side of the pricing spectrum for mid-range 254mm(10″) miter saws.

With the exception of the saw’s sharp-edged and bulky motor, things like a slim blade guard that folds up into the blade housing or bed extensions that figure hug the saw base in their stored position give the saw a nice sleek look.

Don’t be fooled by the saw’s slim design as the 254M weighs in at little over 20kg’s so if your planning on moving the saw around a lot maybe considering a miter saw that is a little lighter would suit you better.

I also liked the fact that the saw had measurements printed on its fence, making quick, repetitive cuts that did not need to be deadly accurate seems somewhat simpler.

I must, however, admit that my decision to buy this saw was not only based on what I saw on the shop floor (as to some it may not merit a second look) but in part, also on previous experiences I had when working with the smaller Metabo KGS 216 M. 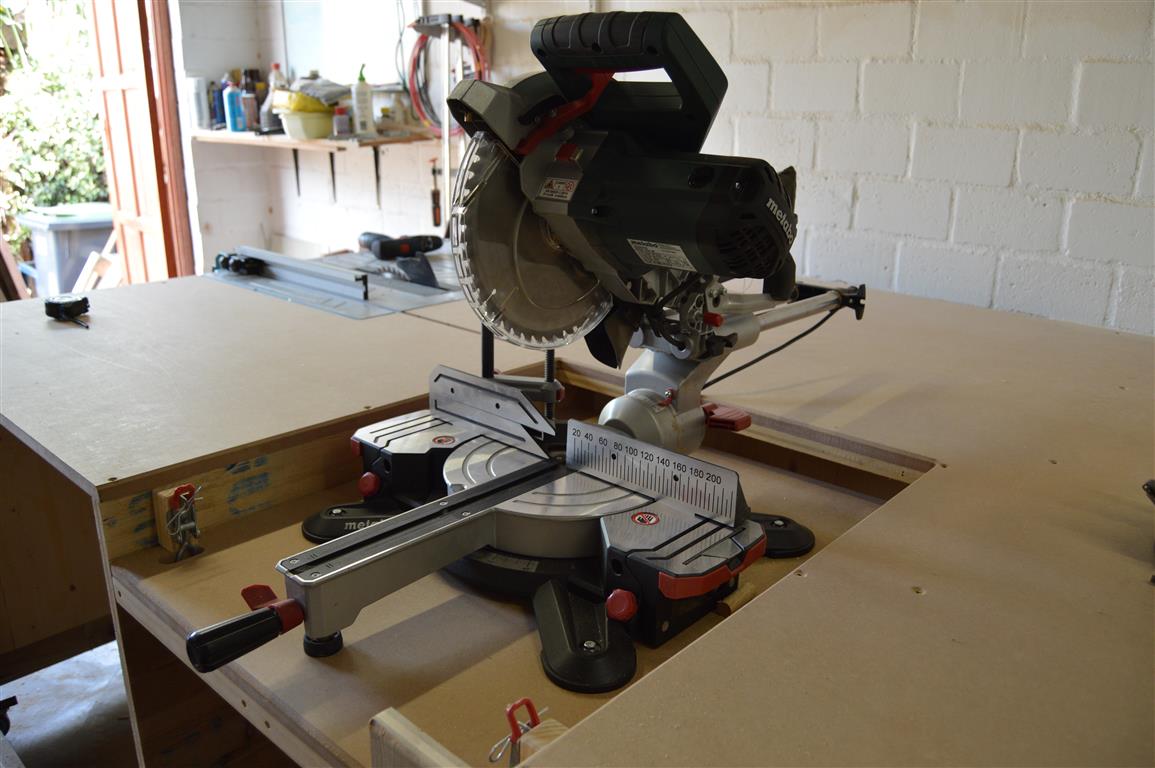 In most cases when unpacking new power tools, especially in the case of precision equipment like miter saws, some degree of setup or fine tuning is required.
I was very pleased to realize upon taking my saw for its maiden spin that almost everything (most notably the laser) was already factory fitted and zeroed to be true.

The laser lined up to the right of the cut line with the miter and bevel setting not needing any adjustment either.

Angle adjustment on the turntable is done by loosening the bed lock knob and pushing down on a spring-loaded release lever. This lever latches in place at 0°, 15°, 22.5°, 30°, and 45° preventing the bed angle from going out when tightening the lock nob.

To allow the KGS 254 M to compete with other saws in its price range and above it is fitted with a powerful 1800W motor. 300W larger than the KGS 216 M allowing it to handle even bigger and denser stock.

While there are cheaper saws with larger motors like the Evolution FURY3-XL (2000W) or even the Einhell TH-SM 2534 (2350W) it seems as if the KGS 254 M has found the sweet spot between power, safety, and quality cuts. 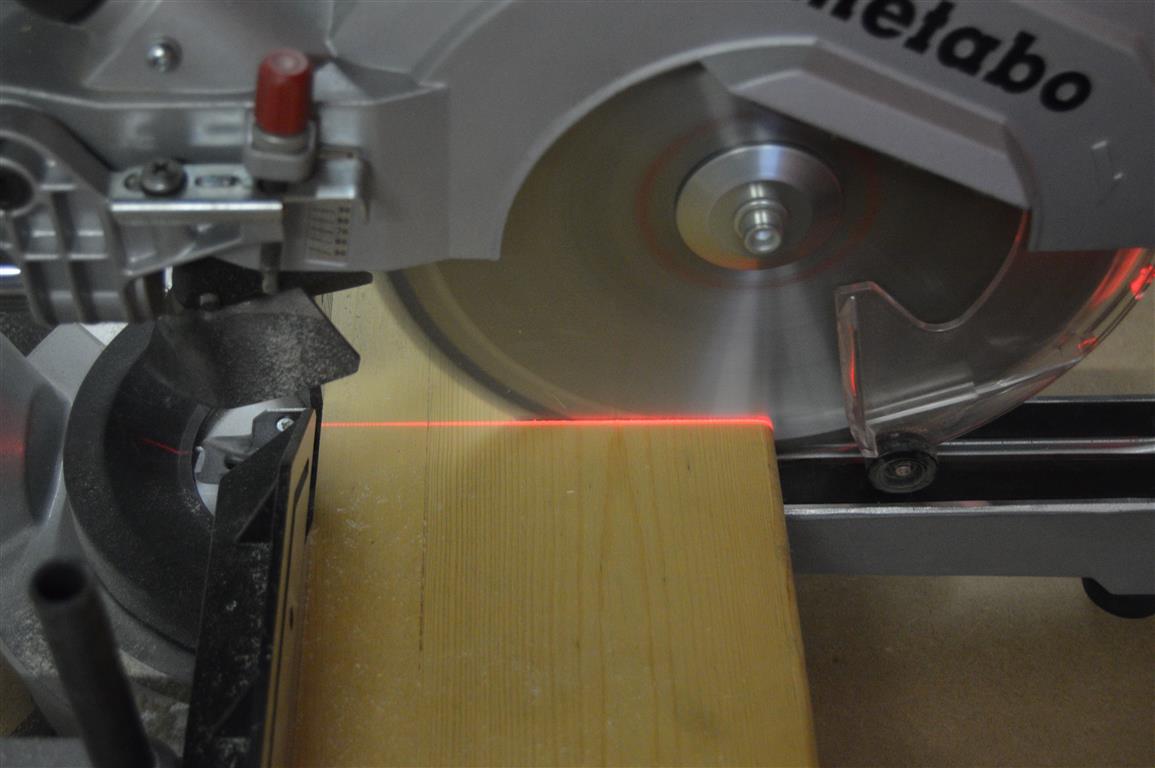 Thanks to some sharp German engineering the KGS 254 M does a great job in getting the 1800W down to the 254mm(10″) blade (48 tooth ATB precision cut Metabo blade supplied with the saw) to produce surprisingly high-quality cuts in a range of different lumber types or even when cutting laminates.

The praise for the quality of these cuts is largely owed to the slide that is fitted with precision bearings that offer very little to almost no play on the slide mechanism.

Marrying the 254mm blade with the saw’s 243mm slide stroke allows cuts in stock up to 90mm thick and 305mm wide making it a big asset when cutting large battens or sizing lumber for decking installations.

Features that set the KGS 254 M apart from its competition

Some of the features that did not capture my attention at first but have proven to be quite nifty are things like the power cord attached at the rear of the slide or the laser guide mounted at the top of the blade housing.

With the power cord coming in at the back of the slide you will have to sacrifice an additional +/-50mm behind the saw but in return, you won’t have to experience the aggravation that comes with a power cord getting hooked on other parts of the saw while using the slide.

As for the laser, I can imagine placing it at the top of the blade housing must have proven quite a task for designers but the rewards are well worth it. Moving the placement of the laser means that the saw isn’t constantly spewing debris at the laser (which in most other cases is mounted on the slide behind the blade) that can cause a build-up of visibility compromising dust on the lens and in extreme cases even damage to the laser.
In addition to this, fixing the laser to the blade housing leads to greater accuracy because the opportunity for something to go out of alignment between the chopping mechanism and the slide mechanism gets eliminated.

Though not really a game changer the 254 M also has a nifty little work light built into its design allowing you to illuminate the stock when ambient light is lacking.

Where the KGS 254 M Falls short 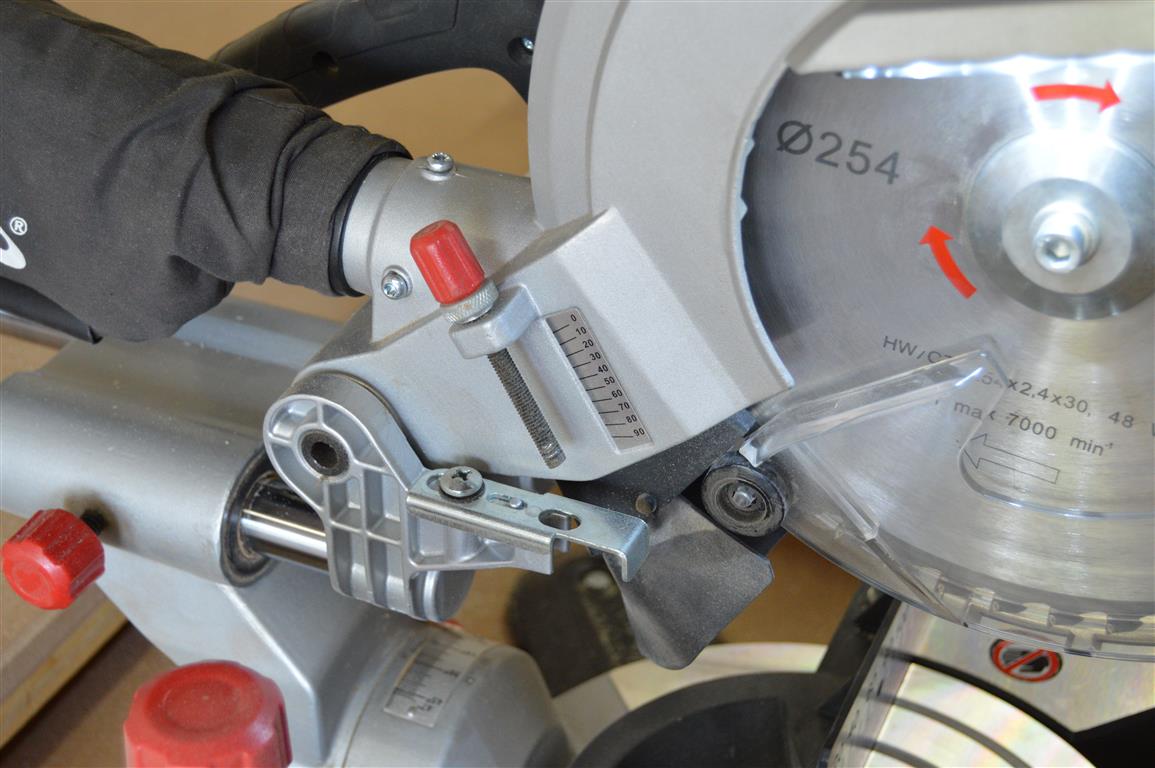 Perfection is objective and though the Metabo KGS 254 M has done a good job of impressing me it has fallen short in some areas.

The most notable shortcoming of this saw is its depth restriction guide that is lacking in accuracy.
Though it is not often that I have to restrict the depth of cuts I do feel that on a saw like this a little more attention to the design of the mechanism could have made for a better quality and more accurate cut.

The 254 M is a single bevel miter saw and can only tilt up to 45° to the left and though it doesn’t take a rocket scientist to realize that simply turning the stock around would produce the opposing bevel, the operator will be sacrificing the convenience of a double bevel miter saw when purchasing the 254 M.

The Metabo KGS 254 M has thoroughly impressed me. It may not be the sexiest saw out there but the quality of the machine along with the quality of the cut it produces is not something I would have expected from a saw in its price range.  With the exception of the saws obvious shortfalls like its depth restriction and its weight, I think Metabo have done an exceptional job at providing consumers with a well built, cost-effective alternative to some of the markets biggest names.
Considering all of this is what led me to my conclusion that the KGS 254 M is the best value miter saw for DIY on the market at the moment.
I have been using mine for almost a year now and am currently looking at adding the Metabo MPTDH330 thicknesser to my tool arsenal as well.

You can check out some of my recent builds using the saw on the Woodshop Junkies Youtube Channel.

Building a fold-away station for my Metabo Miter Saw