Deprecated: Methods with the same name as their class will not be constructors in a future version of PHP; wp_invictus_recent_posts has a deprecated constructor in /var/www/volumes/xvdh/vhosts/woodworkjunkie.com/httpdocs/wp-content/themes/wp-invictus/inc/widget.php on line 9 Deprecated: The called constructor method for WP_Widget in wp_invictus_recent_posts is deprecated since version 4.3.0! Use __construct() instead. in /var/cache/wordpress-sources/5.9.3/wp-includes/functions.php on line 5416 All You Need To Know About Saw Blades – Choosing A Table Saw Blade | Woodwork Junkie
Skip to content 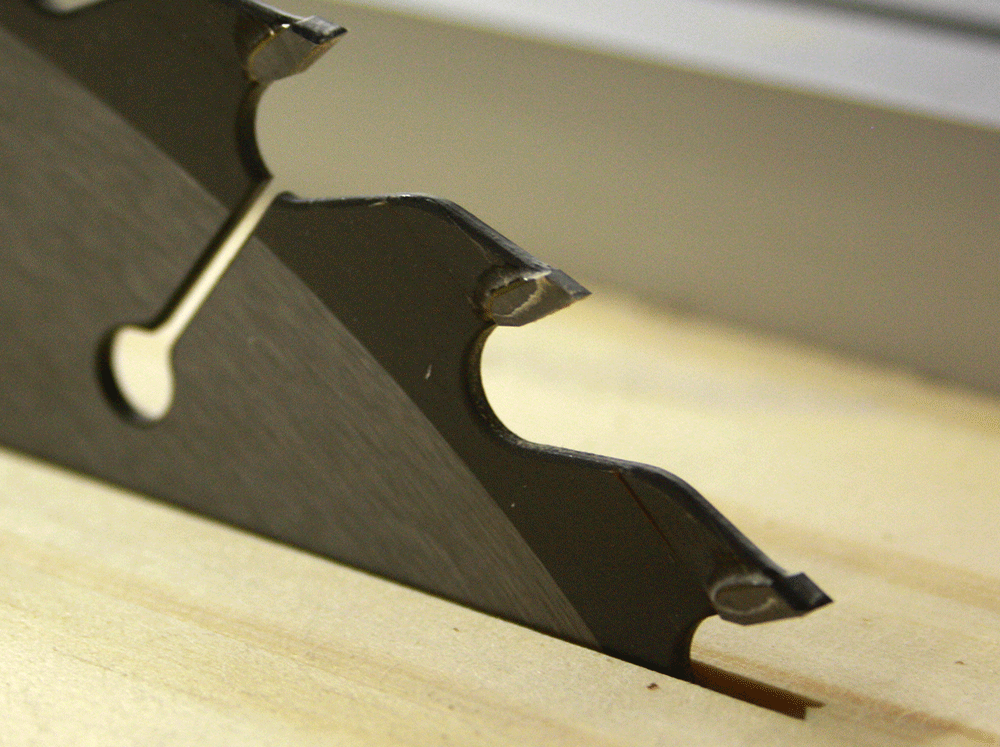 Odds are, when buying a new saw, whether table, circular or miter, it often comes fitted with a mediocre blade.
While these types of blades are often all-rounders and are more than good enough to produce most cuts well enough, in some cases the woodworker may want to opt for a blade better suited to a specific task.
In this articles we will be looking at all the different components of carbide tipped saw blades and how they relate to the quality of your cuts.
Choosing a table saw blade or even a blade for your miter or circular saw becomes much clearer when armed with the correct information

Factors to consider when choosing a new saw blade: 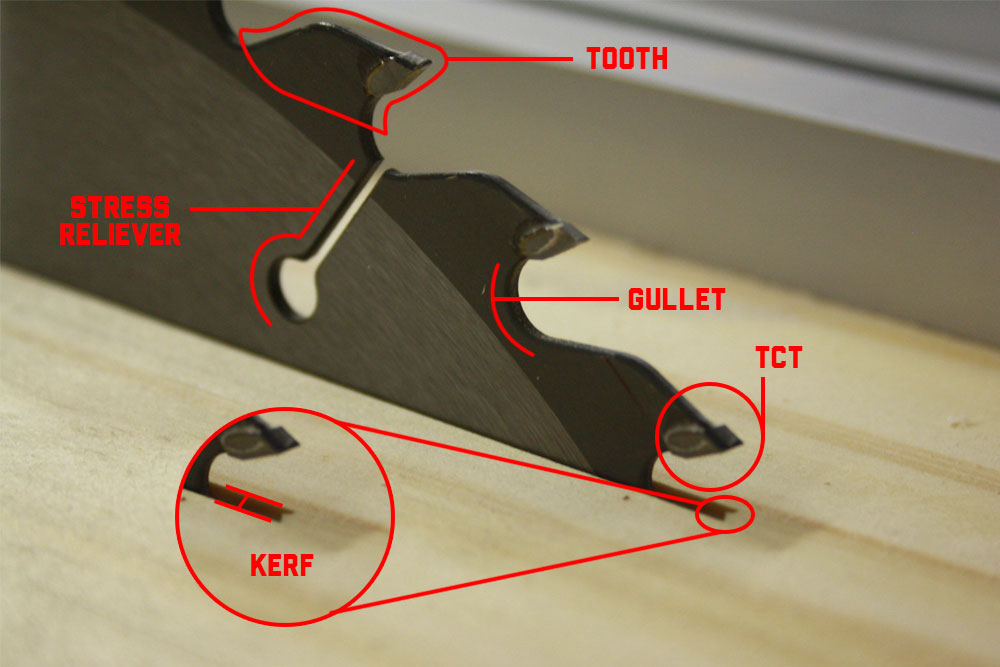 Tungsten carbide tip (TCT) – The business end of the blade. These are arranged around the circumference of the blade and are made from a much harder material (tungsten) than the rest of the blade, giving the blade a longer useable lifetime.
Due to the hardness of these tips, they will not warp or bend when they are subject to a mechanical stress but would rather break. It is for this reason why any embedded metals in a stock like nails or screws can and will destroy a blade if the blade had to come in contact with it while cutting.

Gullet – This is the name given to the area in front of each tooth. The gullet is to make space for the wood shavings that come of the stock when sawing. Generally, the closer the TCT’s are together the smaller the gullets are as the tips shave off less with each pass.

Sawteeth – These are the areas protruding between gullets that house the TCT’s. Smaller gullets allow for more teeth which are common on crosscut blades.

Hook angle – The hook angle refers to the pitch of the tip with respect to the center of the blade. Either forward (positive) or backward (negative). A larger or more positive pitch would produce a faster, more aggressive cut which is better suited to ripping while crosscut blades have a lower or negative pitch to restrict feed rate. Most standard blades possess a positive hook angle of between 5 to 15 degrees.

Kerf – The kerf refers to the area of wood removed after cutting and the kerf width is determined by the width of the TCT.
Blades are available in thin kerf (<1.8″) and full kerf versions with thin kerf blades being more intended for lower powered saws. The thin kerf blades receive less resistance from the stock as a smaller area is in contact with the stock when sawing but they tend to be more unstable as then can bend more easily.

There are many different types of saw blades that are determined by their tip configuration or “grinds” of which the four most common ones are: Flat top grind (FTG), Combination (ATBR), Alternate top bevel (ATB) and triple chip grind (TCG). 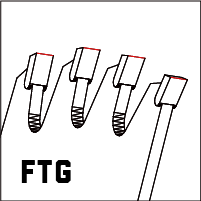 1. Flat top grind – Are square tipped (raker) tooth blade for fast and aggressive ripping where chip-out is not a concern. They are most durable and long lasting while being easier to maintain.

An FTG blade cuts through the stock by removing small squares with each tooth pass and so creates a fair amount of splintering. 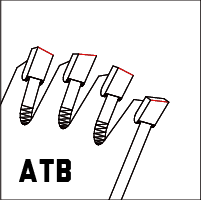 2. Alternating top bevel – These are of the more common type of blades. They are made with beveled tips arranged in a crisscross pattern. Adding a pitch such as this to the tip of the blade makes for a smaller amount of the tip doing the cutting and so generates less chip-out with the largest drawback of having a blade that dulls faster.
In the case of woods that tend to generate high amounts of chip-out like pressboard or veneered woods, an HI-ATB blade does a better job. 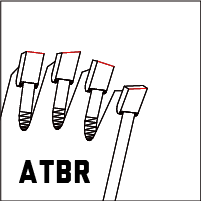 3. Combination blades – These are blades that possess a combination of the above-mentioned tip arrangements. Combinations blades are considered general purpose blades as they possess a crosscut component but also a ripping component.

Tips are normally arranged in a four-to-one fashion with four ATB tips followed by one FTG tip. 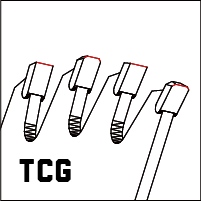 Triple chip grind – These configurations are more intended for harder materials like plastics, metals or laminates.
These blades are made to be more resilient while also limiting chip-out in harder, more brittle materials.

Tungsten carbide tip blades come in various sizes from 4-1/2″ to 12″ while 10″ is generally the go-to blade size for most hobbyists type table saws.
Miter saws normally use 7 or 10″ blades while circular saws can be made to operate with blades as small as 4-1/2″.

The teeth count of a blade is one of the more prominent factors that will determine the quality of a cut.
More teeth generally mean cleaner cuts while being indirectly proportional to feed rate. The reason for this is smaller gullets.
For the blade to accommodate more teeth the gullets need to be decreased in size and so allowing less space for wood being shaved from the stock.

60 teeth and up are more often used for crosscutting. They produce very little chip-out while requiring a slower feed rate.

In the cases where cleaner cuts are not essential, a blade with a lower tooth count will work just as well while costing less and also cutting faster.

All You Need To Know About Saw Blades – Choosing A Table Saw Blade was last modified: July 7th, 2017 by Jean

This article has 4 Comments